As Nelson Pass, founder of Pass Labs and the XA25's designer, writes in that manual: "The signal path from input to output has been simplified to fewer components. Degeneration, 'the other form of feedback' has been eliminated. The output stage consists of a single pair of 700 watt new generation output transistors operating push-pull Class A. We still use the same 'New Old Stock' of small power JFETs and cascoded MOSFET, in the classic 'CFA' voltage gain circuit. The amplifier is still DC coupled and has no frequency compensation."

The XA25 is "a simple 3 stage circuit with total of three pair of push-pull gain transistors. In their ideal state, matched push-pull FETs give perfect 'square law' cancellation of distortion, an effect somewhat spoiled by degenerative Source resistance used to constrain the 'personality' of the devices. The removal of this form of feedback is an important element in the performance of the XA25 and is accomplished by new approaches to stabilizing gain and bias of push-pull FETs."

Break-in and cable issues
Before the XA25 had even broken in, I'd almost given up on it. Its sound was unpredictable. I mean, dagnab it! How long should an amp take to wake up and play right? I had the damn thing on and playing music for at least four weeks, and still it occasionally sounded unsettlingly "different." But even on the first day I turned it on, I realized that the XA25 had an unusually solid midrange presence. Every day thereafter, I discovered more sonic wonderments—and more that I could not grok.

During this extended break-in period I experimented a little with speaker cables, and quickly realized that the XA25's sound changed with the wire. I began with my usual Auditorium 23 cables: the sound was rich and natural, if maybe a bit restrained. When I switched to AudioQuest Type 4s, the sound tightened up but also became slightly grainy. When I switched to AudioQuest's GO-4, the XA25 seemed to have found its clear, open, vivacious channel.

Listening with the Quad ESL
Four weeks in I had a gut feeling that the XA25 was a really good amplifier, but what I was hearing had yet to fully validate that notion. Then I had another gut feeling: The XA25 might be a good amp for those hard-to-drive old Quad ESLs. I hatched a plan.

I have a good friend I call my Irish Brother. He's a musician, a record producer, and a lifelong audiophile. More than anything, Irish Brother is obsessed with finding the perfect amp for his vintage Quad ESL speakers—original "57s" restored by Kent McCollum, of Electrostatic Solutions. For decades, IB has tried every conceivable amp. His current favorite is an ASR Emitter II MOSFET amp that outputs 280Wpc into 8 ohms and costs $24,900. Uber helped me take the XA25 to Irish Brother's apartment.

There we played a wide range of simply miked, uncompressed files. I thought the XA25 drove his old Quads better than the ASR, and better than any other amp I've heard—except the Miyajima Laboratory Model 2010 ($9995). With the restored Quads, the Miyajima 2010 made music sound polished and florid—its glowing tubes produced a luminous midrange that was probably more enticing than real. Voices, and individual notes from guitar, lute, and flute, had a shimmering, almost rustic quality that was unforgettable. I called the Miyajima 2010 "the Amplifier of the Floating World"—its wabi-sabi charm reminded me of how futile and shallow-minded the search for audio perfection really is.

The Pass Labs XA25 had less wabi-sabi than the Miyajima, but it made the Quad's legendary midrange more solid, dynamic, and well defined than I'd ever thought possible. Percussion sounded really BIG—for Quads. The ESL isn't known for its bass or dynamic abilities, but the XA25 gave these more jump and low-frequency bump than has any other amp I've heard.

We played a lot of percussion. It was easy to tell whether drumheads were tight or loose, and all were made of tan-colored skins whose vibrating thicknesses and diameters I could sense. Everyone present in the Irish Brother's crib was smiling, mumbling "Wow." One person kept saying how "transparent" the XA25 was.

"Most amps give you the color blue," said Irish Brother, "but this amp goes from light blue to dark blue and all the shades in between. I can really tell my singers' timbres like never before—sort of like the way they sound in real life, when they're just talking to me on the mike. This amp really brings out the unique characters in their voices." A nerdy audiophile, IB kept switching back and forth between the $25,000 ASR and the $5000 Pass Labs XA25. "The ASR seems more linear across all frequencies with the Quads. It sounds more coherent across the board, but veiled next to the Pass."

"I've never heard the Quads' midrange sound so full-bodied," I opined. "Actually, I've never heard any electrostatic sound that realistically dense." In my opinion, electrostatic speakers' biggest flaw is that they make music sound as if it's hanging in a statically charged vapor, rather than like real flesh and blood standing right there in front of me. Through the Quads, the XA25 radically improved the tactile presence of music and musicians, their voices and instruments.

From another of Irish Brother's guests: "The ASR makes this recording sound like an album. The Pass makes it sound like an event."

Irish Brother: "With the Pass you hear a lot more resolution, but there is definitely a tad of thinness to the lower midrange that might get grating over time. Bass is not quite as full as the ASR, but close. The Pass sounds natural . . . real-life natural is sometimes more boring than hyped-up artificial."

Irish Brother's experience exactly mirrored my own. But neither of two other seasoned listeners present heard the thinness IB referred to. On one thing we all agreed: The Pass Labs XA25 delivered a potent transparency the likes of which none of us had heard before. It was as if the audio system had disappeared, making possible a direct view of what the microphones registered, unmitigated. 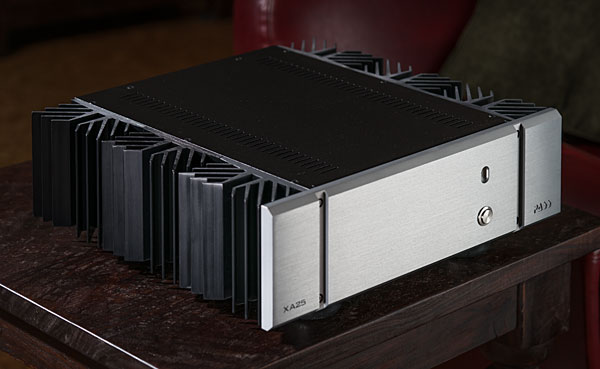 Listening with the Magnepan .7
Besides their low price, the beauty of Magnepan's .7 quasi-ribbon panel speakers ($1400/pair) is their ability to display a similar transparency. They do this easily because they don't exude the struggling exaggeration of tiny, overworked, long-excursion drivers trying to punch their way through to my bunker couch. People who know only speakers with dome tweeters think the .7 sounds soft and not so highly resolved. I believe they are wrong. As Irish Brother said, "real-life natural is sometimes more boring than hyped-up artificial." Driven by the Pass Labs XA25, the Magnepan .7s did real-life natural with ease and élan. As it had with IB's ancient Quads, the XA25 got a firm grip on the Maggies' membranes.

I put on the Fauré Requiem, with soprano Sheila Armstrong, baritone Dietrich Fischer-Dieskau, and Daniel Barenboim conducting the Edinburgh Festival Chorus and the Paris Orchestra (LP, Angel S 37077). I was immediately taken by the depth and volume of the soundspace presented by the Maggies and Pass Labs. Sounds appeared to float powerfully in an abyssal space that extended to the right of the right speaker and to the left of the left, and even slightly in front of them.

Usually, only the best audio systems can sort out Fauré's densely orchestrated death mass. To play it really well, a system has to move big amounts of air, and not sound distorted trying to simultaneously reproduce low bass and high voices. The Maggies submitted completely to the Pass Labs' authority, making the most beautiful, detailed, effortless sound I'd ever heard from these modest panels.

Most important, the lower midrange and upper bass were the opposite of thin. Bass weight and organ power were well reproduced by a speaker not famous for these traits. Fischer-Dieskau sounded a bit distant, but his gentle, lyric baritone was pure and true. I listened to this recording at relatively low volumes. The Edinburgh Festival Chorus could sound a little screechy if I turned the volume up too high.