Decades ago, integrated amplifiers were full-featured beasts—and then there was a move toward minimalism, at least at the higher end. Today, things have swung back again: With some exceptions, today's integrated amplifiers once again offer myriad extras. Today there's more to offer. In addition to the traditional phono stage and headphone jack of decades past, today there's Bluetooth, internal DACs, streaming, implanted mood-enhancer chips, and integrated cappuccino/latte/espresso machines—all at a competitive price point.

Design
Measuring 16.9" wide, 4.5" high, and 13.4" deep and weighing just under 20lb, the CXA81 has a steel chassis and an aluminum face. It's supported in the rear by two footers composed of natural silicone rubber and ABS, and in front by a case-wide, ½" black-plastic ridge finished with a long rubber strip, which created the illusion that the CXA81 was floating above the shelf on my Salamander rack. It's a subtle but effective design element that suggests that thought and care were taken in the CXA81's design.

The minimalist front panel concentrates most of the controls—everything but the standby/on button, the 3.5mm headphone jack, and (thank you) the large volume control knob—onto an acrylic center window with backlit LEDs: Four analog source-select buttons labeled "A1" through "A4," a "Protection Indicator" light (which indicates clipping, over-voltage, overheating, or short-circuit), a button to toggle between A and B speaker options, a mute indicator, three digital source-select buttons marked "D1" through "D3," a tiny button stamped with the universal sign for USB, and that large volume control knob. Sharp eyes are required to read the labels. A universal remote—included—duplicates the CXA81's front panel controls, and then some.

The unit's back panel is smart: Each jack is labeled both above and below, making it easy to read from most angles. On the left side, there's an IEC power input followed by an RS232C connector, a pair of control-bus inputs (RCA), IR in, and one pair of trigger-out jacks, and two sets of speaker-binding posts with large, easy-to-grip plastic caps. On the right, there are digital inputs across the top: a Bluetooth antenna, a USB input, three S/PDIF inputs (one RCA and two TosLink). Farther down, there's a single subwoofer out (RCA), pair of pre-out jacks (RCA), four pairs of analog inputs (RCA), and two balanced inputs (XLR). 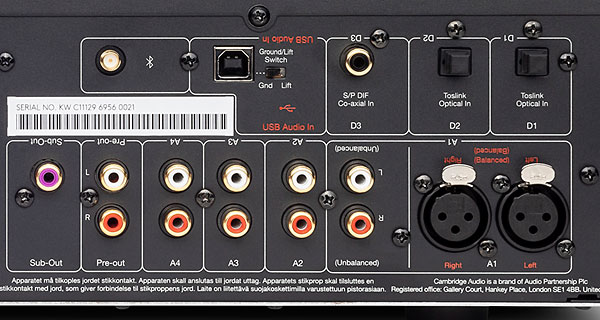 Inside the case, the CXA81 has an amplifier section that drives nominal 8 ohm speaker loads with 80Wpc and nominal 4 ohm speaker loads with 120Wpc, in class-AB. There's a remote control and unbalanced (RCA) and balanced (XLR) inputs; one does not often see balanced inputs at or near this price. It's "Roon tested," which just means that Roon tested it, and, like most DACs, it works with Roon. It doesn't have Wi-Fi or an Ethernet connection.

Stott described the improvements in the CXA81 compared to the original CXA80, which was introduced in 2014: "The analog signal path has been fine-tuned after meticulous and extensive listening sessions." Those listening tests were carried out, he told me, using PMC OB1 speakers. "The preamp section utilizes sound-oriented JRC op-amps. Tone controls have been bypassed, and both the signal chain and power supply have been upgraded with class-leading Wima, Rubycon, and Nippon Chemi-Con capacitors."

There's no phono stage, which is reasonable considering the CXA81's size and price. "Space was extremely tight, and there is no way to guarantee adequate results if integrating a phono stage."

Listening
As Stereophile's Recommended Components list attests, just because a product is built to a $1200 price point doesn't mean it won't pack a wallop. This held true for the CXA81, which consistently impressed me with its ability to challenge competing amplifiers in a similar price range and by how good it sounded with different speakers. The CXA81 had me uttering "wow" (several times) at its transparency to the sound of upstream electronics and recordings. When I switched between my Thorens and Kuzma turntables, for example, the difference was clear, immediate, and profound, as if there was no amp in the signal chain. For a component at this price, the CXA81 didn't editorialize much, instead faithfully bringing forth what's buried in the grooves and pits.

Still, the CXA81's mien was forgiving of lesser recordings, even as it brought out the best—or much of the best—from better ones. Relative to my reference amplification components, there was some dryness at midrange and treble frequencies. The low end was solid, bass energy abundant. The CXA81 consistently created a large, atmospheric soundstage with solid images. Tonality was less saturated, less sweet and drier than my ideal (as embodied by my far-more-expensive Shindo separates), although this dryness (and dearth of sweetness) was apparent only on some recordings. Dynamics were good.

Spinning vinyl
Using my Thorens/Jelco/Hana/Luxman setup, I had a total blast spinning black discs through the CXA81. The two sets of speakers highlighted the amplifier's flexibility and user-friendly appeal. 1960's Poll Winners Three! features guitarist Barney Kessel, drummer Shelly Manne, and bassist Ray Brown in a super-swinging jazz fest (LP, Contemporary S7576). A classic Roy DuNann recording, Poll Winners is flat-sounding, with great immediacy and dynamics. With the Cambridge powering the Polk L100s, the trio's performance of "Mack the Knife" had energy, snap, and warmth. Brown's bass sounded comfortably rich and Manne's cymbals imaged with pinpoint definition. The CXA81 drew the music in a large, reverberant space, with Kessel's guitar soaring above the other instruments.

Full immersion. In the moment, I found nothing wanting. I was caught up in the music, which is the goal. The Cambridge Audio/Polk pairing was simpatico. 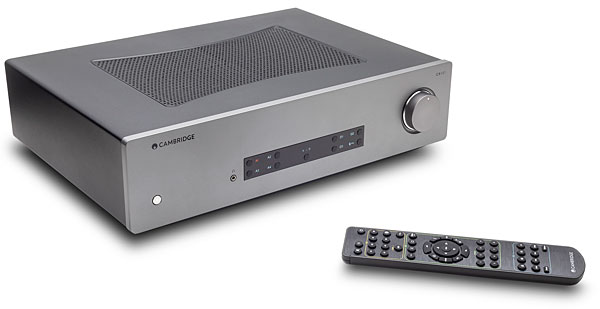 XTC's 1982 classic, English Settlement (LP, Virgin V2223), is a subtly anarchic recording with some of leader Andy Partridge's best songs and a gigantic soundstage courtesy of producer Hugh Padgham. I'm lucky to own the 12", 45rpm single, "Senses Working Overtime" (Virgin VS462-12), which has one of the most powerful, smack-your-skull recorded bass drum sounds I've ever heard. The song begins with gently plucked acoustic guitar and atmospheric frame drum and tambourine. Soon, Terry Chambers's bass drum pummels two and four, dead center. The CXA81/L100 pairing delivered that explosive bass drum with excellent energy, weight, tone, and definition. The song unfurled within a colossal soundstage with exciting colors and power. The CXA81 recreated this classic English rock epic with energy, dynamics, and force.

Fifteen years later in British rock history, Radiohead released OK Computer (Capitol Records 7243 8 5522918). Where XTC was extroverted, largely upbeat and energetic, Radiohead's music was by turns depressed, brilliant, and introverted. Nonetheless, OK Computer is also a classic, evidenced in the twinkling, sad/beautiful "Let Down," which throbs and thrums like an anguished lost child. The CXA81/L100 duo's presentation of the song bathed me in rich guitar tones, shimmering bell sounds, and thumping drums in a large-scale, womblike soundstage. Though this album has not worn well from a production viewpoint, sometimes sounding shrill, the CXA81's power and drive enabled its big soundstage to fill my room and nearly warp my senses. The Cambridge Audio/Polk tag team had me at the needle drop.

CXA81/Quad S2 speakers
The CXA81 brought out the best from the Quad S2's ribbon tweeter, producing upper-midrange and treble frequencies with tactile richness and great sense of life. Further down, Kessel's guitar was big, glistening, and well-defined in time and space, and Ray Brown's acoustic bass was tightly focused. Dynamics were to die for. The drums and percussion in XTC's "Senses Working Overtime" were more textured and delicate via the CXA81/S2 pairing, and that massive bass drum punch grew more focused and cleaner. Leading edges were better defined.

Where the CXA81/Polk combo made Radiohead lush and warm, the CXA81/Quad duo brought out the music's tremulous nature, with intricately framed vocals and gossamer guitar layering within an ethereal atmosphere. Whereas the CXA81 juiced the Polks to a lifelike experience, it enabled the Quads to create their more elegantly assembled soundstage with delicate timing and textural cues. It recreated well the upper air and shimmering sounds of this Radiohead classic. 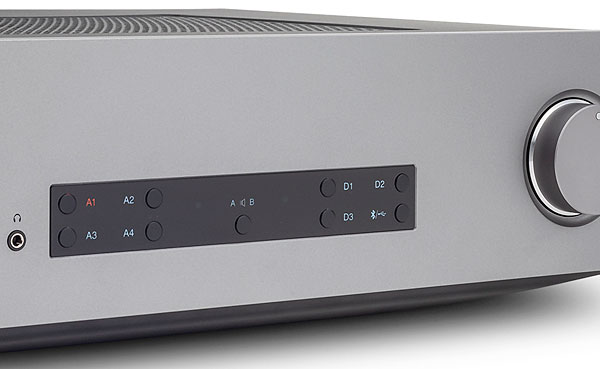 CXA81's DAC meets the BorderPatrol DAC SE
Built-in DACs in integrated amplifiers are sometimes afterthoughts; in an integrated amplifier this cheap, it's almost to be expected. But when I played "American Reckoning" from Bon Jovi's 2020 (24/48 MQA, unfolded to 24/96, Island Records/Tidal), John Lennon's "How Do You Sleep" from Gimme Some Truth (24/48 MQA, unfolded to 96kHz, Capitol/Tidal), and Aria from Lang Lang's take on the Goldberg Variations BWV 988 (FLAC 24/48, Deutsche Grammophon/Tidal 481), the CXA81's ESS Sabre ES9016 DAC acquitted itself well.

Bon Jovi's elegiac "American Reckoning" pays tribute to George Floyd ("When did a judge and a jury become a badge and a knee?"): It's a simple, powerful arrangement for vocal, guitar, strings, and percussion. The CXA81's rendering was large in scale and atmospheric; Bon Jovi's voice was giant in the mix, dry in texture but nicely outlined. The BorderPatrol DAC SE created a deeper soundstage with more detailed images; Bon Jovi's voice had more richness and depth.

Still, even remastered, this 1971 track didn't give either DAC a lot to work with. The song sounded crisp and clear with good imaging and top-end air via the CXA81's DAC. It also sounded a mite thin and lacking in midrange body, which is about how the recording sounds. The BorderPatrol DAC gave the slow-grooving tune more depth, better tone, and a fatter, more dense portrayal overall, but it wasn't night-vs-day better.

It was easier to notice the differences between the CXA81 and the BorderPatrol DAC on Lang Lang's Goldbergs outing. As Herb Reichert has often noted, acoustic piano is the best test of a DAC or cartridge's ability to capture and express tone, texture, and physicality. Via the CXA81, the Aria to Lang Lang's Goldberg Variations—the studio version—sounded full-scale, with good imaging and texture. Through the BorderPatrol, the tone was richer yet darker-sounding than through the integrated's DAC. The BP provided a better sense of hammers striking strings and an improved sense of scale. 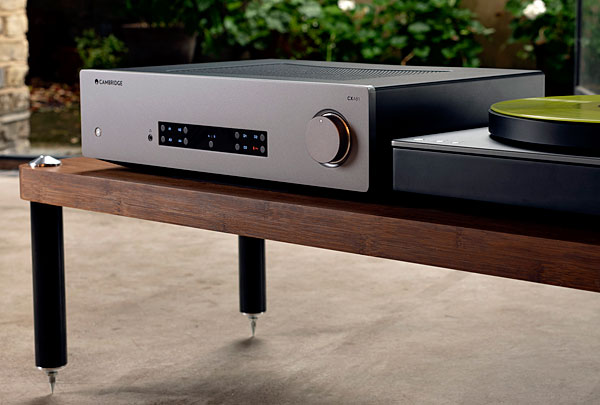 Considering that the BorderPatrol DAC SE costs half again as much as the Cambridge Audio CXA81 amplifier with DAC, the CXA81's DAC more than held its own in terms of soundstage, dynamics, drive, tone, and texture. Once I figured out how to operate Roon (thanks to Jim Austin, Kal Rubinson, and publicist Jaclyn Inglis, who now represents Cambridge Audio and Roon), the CXA81 mated with Roon and gave me no issues.

Compared to the Schiit Ragnarok 2
Of the integrated amplifiers I have on hand, the Schiit Ragnarok 2 is the most comparable to the CXA81. The Schiit specs out at 60Wpc into 8 ohms and 100Wpc into 4 ohms, compared to the CXA81's 80Wpc into 8 ohms and 120Wpc into 4 ohms. (I have the $1700 "fully loaded" version, with phono stage and DAC card.) The Cambridge Audio piece had better top-end air, a slightly bigger soundstage—wider and deeper—and a more laid-back presentation, while the California-built Schiit amp offered better tone, slightly better drive, and a better sense of intimacy; the Schiit was more physical-sounding. But the Schiit is also more expensive: Even the more comparably priced, "Just an Amp" version of the Schiit, without the phono stage or DAC, costs $200 more, at $1499, while the Cambridge has a DAC plus Bluetooth and a little more power.

Conclusion
I greatly enjoyed my time exploring the CXA81. It helped me realize how much music can be had for such a low price. It knocked me flat with its ability to sound good in so many ways. It is versatile, well-made, and smartly designed. Most important, it sounds good to great. If you're in the market for an affordable integrated amplifier, this one should be on your audition list.