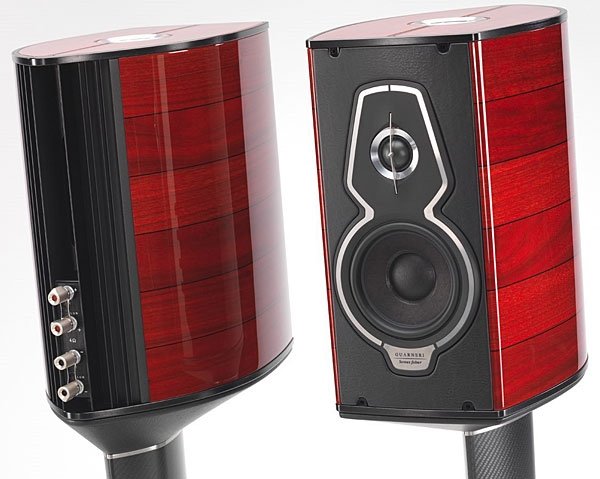 Stereophile writers have reviewed three versions of Sonus Faber's stand-mounted, two-way loudspeaker, the Guarneri: Martin Colloms on the original Guarneri Homage, in 1994; Michael Fremer on the Memento edition, in 2007; and Art Dudley on the Evolution, in 2012. The Guarneri has always been an expensive speaker—$9400/pair with matching stands in 1995, $15,000 with stands in 2007, $20,000/pair plus $2000 for the stands in 2012—but its prices have been related to its build quality and appearance, both of which have always been superb. Now we have the Guarneri Tradition, for $15,900/pair, including stands.

Sonus Faber launched their series of Homage Tradition loudspeakers at an event in February 2017, at the World of McIntosh Townhouse in Manhattan's NoHo neighborhood. After a presentation of the technology embodied in the new speakers, we listened to the line's three models, the floorstanding Amati and Serafino and the stand-mounted Guarneri, each in a dedicated room with a system based on Audio Research components. All three were sonically promising, but it was the smallest and least expensive that I felt would work best in my room. I asked for a pair for review. 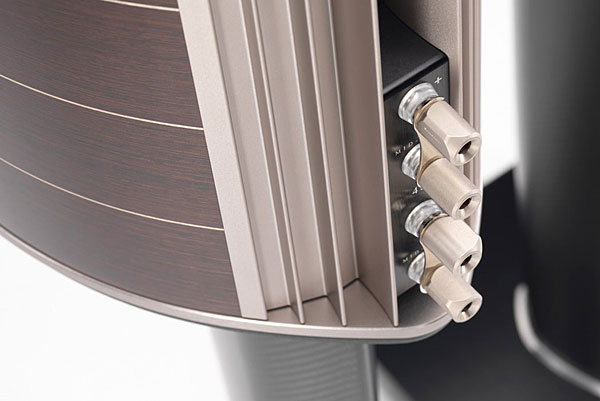 Design
Every iteration of the Guarneri since the Homage has featured an elegantly lute-shaped cross section. The form is intended to pay homage to the famed 18th-century Italian violin makers—including, of course, the Guarneri family, of whom Giuseppe "del Gesó" Guarneri (1698–1744) was the final member practicing the craft. The curved sidewalls, laminated from several thin sheets of tonewood, are veneered with wengè (a tropical hardwood often used in guitar making), with maple horizontal inlays—or walnut stained red with black inlays—and attached to an MDF frame. The top and bottom panels are of brushed, titanium-colored aluminum; the bottom is finished with black felt where it couples to the stands, and the top has wooden inlays to match the sidewalls, with a central glass circle silk-screened with an Sf logo. With a front baffle finished in leather stained brown or black, and Sonus Faber's traditional grille of stretched vertical threads, the Guarneri Tradition is a stunningly beautiful piece of furniture.

But this is Stereophile, not Better Homes & Gardens; it behooves me to examine the technology used in this speaker. The tweeter and woofer are mounted vertically in-line within a vaguely violin-shaped accent of what looks like hard rubber, this outlined with aluminum. As in the tweeter used in the Guarneri Evolution, the Tradition's 1.1" (28mm) dome is of silk. But unlike the earlier speaker, a tiny damping pad is held against the center of the dome by a vertical bracket. This technology, which Sonus Faber calls Arrow Point or Damped Apex Dome (DAD), was first seen in their Lilium and Il Cremonese models, and is intended to optimize top-octave dispersion compared with ring-radiator tweeters and conventional domes. The tweeter is mounted in an acoustic-labyrinth chamber of wood. 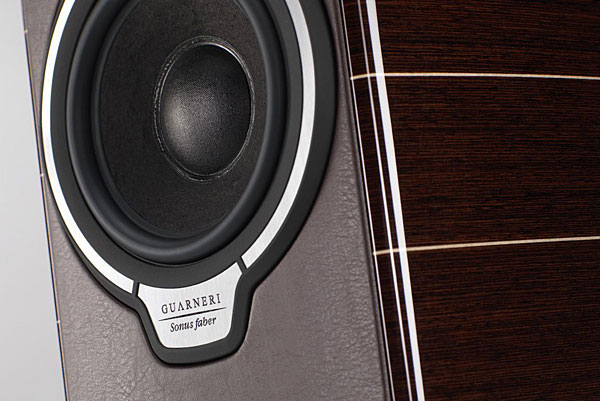 The 5.9" (150mm) woofer features a sandwich cone and a neodymium magnet system, and is acoustically loaded with what SF calls its Stealth Ultraflex System. A vertically oriented, rectangular vent, radiused and lined with rubber at its top and bottom, is positioned between the flared vertical vanes on the aluminum rear panel. This port is 5" deep and its internal opening is damped with black foam, to control the speed of the air flowing through the duct and reduce its turbulence.

The two drive-units are crossed over at 2.5kHz with Sonus Faber's Paracross topology. At the World of McIntosh event, Paolo Tezzon, SF's manager of R&D, described this topology as producing "transparency, speed, and absolute musicality." In the diagram he showed, Paracross differs from a conventional CLC, third-order crossover in moving the second series capacitor to the other side of the drive-unit, so that that cap shares the ground connection with the shunt inductor. I don't see why there should be any electrical difference, but the proof of the concept, of course, will be in the listening. Electrical connection is via two pairs of binding posts mounted below the reflex port. 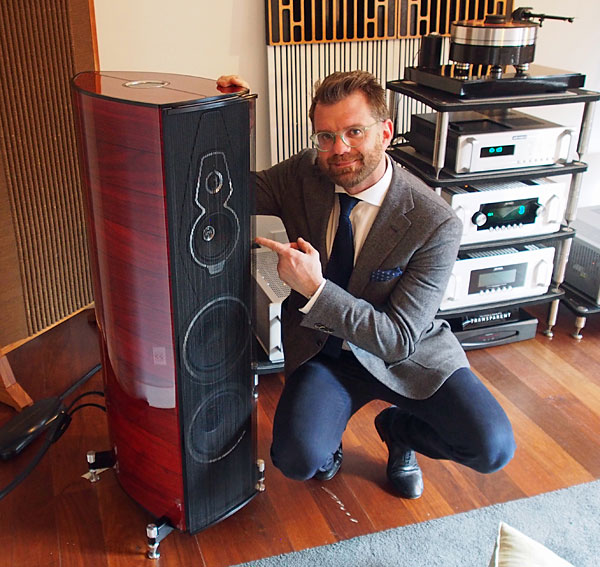 The Guarneri Tradition stands visually match the speakers and combine a carbon-fiber central pillar, filled with some kind of damping material, with aluminum top and bottom plates. Three guide pins on the top plate fit into dimples in the speaker's aluminum base for a secure stance. The massive bottom plate is fitted with four of Sonus Faber's Silent Spikes, which comprise a coaxial sandwich of metal, elastomer, and metal that has been patented by SF as Zero Vibration Transmission (Z.V.T.) and was first seen in their flagship Aida speaker.

We don't always comment on packaging, but the way these speakers and their stands were shipped deserves recognition. If someone is going to spend the price of a Toyota Corolla on an audio component, the manufacturer should ensure that every part of the experience is first-class, including the unpacking.

Sound Quality
After some experimentation, I positioned the Guarneri Traditions close to where the TAD Micro Evolution Ones had been when I listened to them for the review published elsewhere in this issue: with their woofers 74" from the wall behind them, and, due to my room's slight asymmetry, the left speaker's woofer 27" from the LPs lining the nearest wall, the right speaker's 42" from the books lining that wall. These positions slightly shelved down the low frequencies but gave the best transition between the mid- and upper-bass regions. The kick drum at the beginning of a live 2010 recording of Phish playing Little Feat's "Time Loves a Hero" (16-bit/44.1kHz FLAC, no longer available) was both well defined and had sufficient, er . . . kick.

The speakers were toed in to my listening chair. On their conical feet, the stands are almost 29" tall, which places the tweeters 39" from the floor—I had to sit more upright than usual to raise my ears to the tweeter axes. With the dual-mono pink-noise track on my Editor's Choice (CD, Stereophile STPH016-2), the sound developed a slightly hollow coloration if I sat high enough to see the tops of the cabinets. Sitting with my ears on the tweeter axes, I could hear a slight emphasis in the low treble, though the balance was otherwise relatively even. The central image of the noise was appropriately narrow, without any widening at some frequencies. Listeners can be assured, therefore, that stereo images should be accurately presented between and behind the Guarneri Traditions.

The Guarneris' enclosures seemed inert when I rapped their panels with my knuckles; but listening to the sidewalls with a stethoscope as I played pink noise, I could hear some emphasis between 300 and 400Hz. This behavior seemed to have no audible effects with music, however, male voices acquiring no additional thickness. The Sonus Fabers differentiated Leonard Cohen's low-pitched voice in "First We Take Manhattan," from his I'm Your Man (16/44.1 stream, Columbia/Tidal), from the synth-heavy backing. Peculiarly, the 320kbps, lossily-compressed AAC version of this song I found in my library—no idea how it got there—sounded a bit less congested in the treble than the uncompressed Tidal stream.

The 1/3-octave warble tones on Editor's Choice extended cleanly and evenly through the 40Hz band, with the 32Hz tone boosted by the lowest-frequency mode in my room. The 25 and 20Hz tones weren't audible at my normal listening levels, but, commendably, no wind noise came from the ports when I listened from behind the speakers. The half-step–spaced tonebursts on Editor's Choice played evenly and with good control, and the low D-flat on my detuned Fender bass at the end of the 24-bit master file for "Deck the Halls," from Cantus's Comfort and Joy: Volume Two (CD, Cantus CTS-1205), had good weight without booming. Similarly, the double-bass line in Peter Gabriel's sympathetic take on David Bowie's "Heroes," from Gabriel's Scratch My Back (16/44.1 ALAC file from CD, Real World), was reproduced with enough low-frequency power to support the music, while the image of the singer was palpable.

Playing this superbly recorded album, an outlier in these days of the Loudness Wars, reminded me that, 30 years ago, rock recordings were made before dynamic range and light and shade had become dirty phrases among mastering engineers. Prefab Sprout's Steve McQueen (1985), retitled Two Wheels Good in the US (ALAC file ripped from CD, Columbia 4663362), was produced by Thomas Dolby; it amply illustrates the case against modern recording practices, and showed where the Sonus Fabers excelled.

In the Sprout's cover of Jim Reeves's hit "He'll Have to Go," the reverb on the girl singers in the haunting fade-in raised goose bumps—and when Paddy McAloon enters in the verse, the image of his voice hung between the speakers, naturally sized and stably positioned. In the album's final track—the "trucking mix" of the opener, "Faron"—every detail of the sound of the frantic banjo that enters in the chorus was crystal clear despite being mixed fairly low in level, but without that detail being unnaturally spotlit. Similarly, the properties of the various echo and reverb effects weren't obscured by higher-level elements of the mix. In "When Love Breaks Down," the woody character of the electric bass remained clearly portrayed throughout, as Dolby's mix changed from sparse and reverberant to full-bodied with a rhythmic groove. 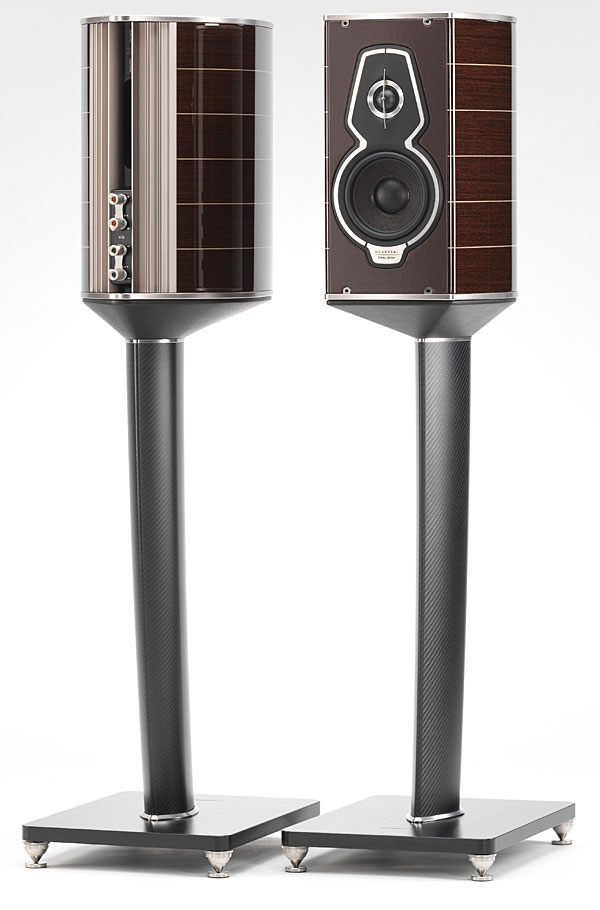 Comparisons
The speakers that had preceded the Sonus Fabers in my room were GoldenEar Technology's floorstanding Triton References ($8498/pair), which I reviewed in the December 2017 issue. With their powered subwoofers, it should come as no surprise that the T Refs offered greater low-frequency extension than the Guarneris and a somewhat less-forward-sounding upper midrange. The stand-mounted Sonus Fabers, however, had a more delicate-sounding high treble and slightly greater precision of stereo imaging.

When I listened to the TAD Micro Evolution One ($14,290/pair with stands), I felt that its bass was on the light side. Compared directly with the TADs, the Sonus Fabers had a warmer balance in the lower midrange with "I Say," from Happy Rhodes's HR5 (16/44.1 ALAC, Aural Gratification), and with Robert Silverman's set of 23 piano sonatas by Beethoven (MQA FLAC files unfolded to 24/88.2, Silver Lining/Audio High). The TADs, however, had slightly less "jangle" audible in the die-aways of chords, though this wasn't apparent except in side-by-side comparisons. 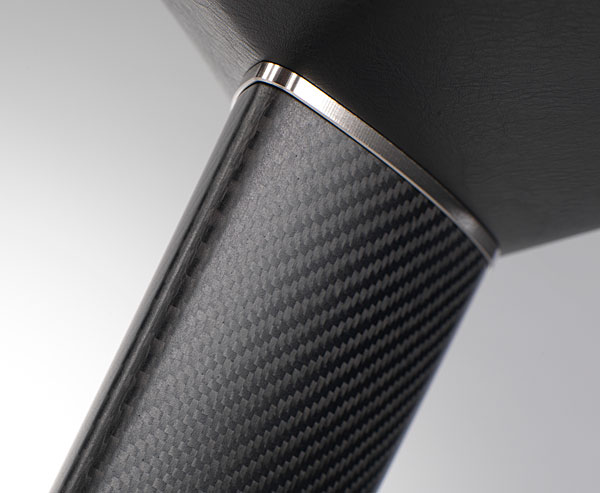 The Guarneri Traditions offered soundstaging of similar superbness of stability and detail to that of the ME1s with my recent recordings of works by Latvian composer Eriks Ešenvalds, performed by Ethan Sperry and the Portland State Chamber Choir on their The Doors of Heaven (24/88.2 WAV files, Naxos 8.579008/HDtracks). If I had to swear to it, the ME1's upper-midrange balance was less forward, something that was noticeable in choral climaxes. Overall, however, I'd say that while sounding different from one another, the TAD and Sonus Faber were as equally matched in sound quality as they were in price.

Summing Up
Like its predecessors, Sonus Faber's Tradition edition of the Guarneri is expensive, and some of that price must be set against its styling and the standard of its construction. It's fair to note that the Bowers & Wilkins 805 D3, which I reviewed in March 2017, costs $7000/pair with matching stands and offers the Guarneri Tradition some competition in sound quality—though it's also fair to note that the Italian speaker is more neutrally balanced than the British, and offers greater low-frequency extension in-room. However, if you want sonic elegance matched with an equally elegant appearance, the Sonus Faber Guarneri Tradition is a contender. I very much enjoyed my time with it.