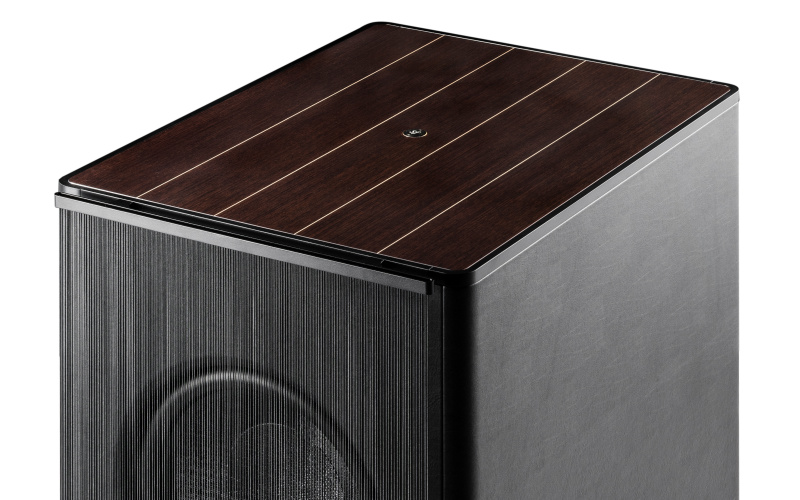 Sonus faber's Gravis VI subwoofer is simply the most gorgeous piece of AV gear to ever cross my threshold. That's an odd statement to make about a sub, to be sure, and certainly an odd way to begin any review. But there's simply no denying that its design is the first thing you notice about the Gravis VI. It's probably the second, third, and fourth thing you notice, as well.

Once you get used to the leather-wrapped chassis, hand-finished wood topper, and taught-string grille, though, there are still elements of the Gravis VI's design to be ogled at. Because in addition to being a gorgeous piece of kit, it's also a decidedly unusual one from a design point of view.  The Gravis VI is a sealed, dual-active-driver design, with a pair of trilaminated "ParaNanoCarbon" 12-inch cones driven by an 1,800-watt Class AB amp. Rather than mounting its drivers in opposition, though, Sonus faber cooked up a configuration that involves one front-mounted driver, and one bottom-mounted driver whose magnet, voice coil, and spider actually hang out of the cabinet, with the magnet sinking into a hole in the plinth, above which the main cabinet sits. Whatever your initial thoughts about such a configuration, it results in, or at least contributes to, a subwoofer with impressive specs, including a -6dB point of 18Hz and a -3dB point in the neighborhood of 20Hz. That's certainly nothing to sneeze at from a cabinet of this size, which while not exactly falling into the "compact" category, certainly doesn't eat up as much space as many other high-performance subs. All in all, the Gravis VI measures in at 24.2 inches high by 17.6 inches wide and 23 inches deep. That's almost as tall as the Paradigm Defiance X15 I recently reviewed, though the Sonus faber simply doesn't feel anywhere near as big, perhaps due to its floating design, and perhaps due to its significantly slimmer front profile.

At any rate, the Gravis VI is designed for very different rooms--and very different systems--than the X15. Engineered and outfitted to be a good match for Sonus faber's own Homage Tradition and Reference speaker collections, prices for which run upwards of $130,000, the Gravis VI carries a premium price tag of €6,000 in the EU and $7,000 in the US, putting it more on equal footing with JL Audio's f212v2 in terms of price. But if aesthetic refinement is near the top of your priorities list for a new sub, I daresay the Gravis VI, with its luxurious Italian styling, is playing around in territory wholly its own, at least in terms of subwoofers.

The Hookup
With a fighting weight just shy of 115 pounds, the Gravis VI isn't one you'll be unboxing and positioning by your lonesome, most likely, but Sonus faber has packaged the sub such that it's not a bear to get out of the box, nor the foam inserts between said box and subwoofer. The cabinet itself comes in a sturdy bag, rather than the flimsy plastic or cloth found wrapping most subs, and the instructions (flip upside down, open, flip again, lift box, voilà) are clear and easy to follow. Atop the sub (actually, at the bottom of the box once you've flipped the box over and back again) you'll find a five-foot power cable, a cleaning kit comprised of Cristalux spray and a microfiber cloth, and the grille for the Gravis VI. The latter comes out of the box looking like a pile of black spaghetti tangled up around a pair of chopsticks, but a few minutes of detangling and some tension applied during the installation process will straighten out those strings lickety-split, and affixing the two support rods to the sub itself isn't all that difficult.

In addition to its pair of unbalanced RCA and pair of balanced XLR stereo/LFE inputs, the Gravis VI also features a high-level Speakon connector, which is a bit of an unusual sight on this side of the pond, at least in consumer electronics.

The sub also features a Bluetooth 4.0 LE antenna for connecting the Gravis Sub Control app for iOS and Android devices. The app not only gives you access to the Gravis VI's four EQ presets--Audiophile, Cinema, Night, and Streaming--but it's also where you'll find crossover settings (variable between 40 and 150Hz), phase control (0 to 360 degrees), parametric EQ (eight filters), delay, and the automatic room calibration feature. The latter works by having you hold your mobile device close to the sub itself while test tones play, then move back to your listening position for another series of tones. It's quick, it's simple, it's easy, and it actually does a good-enough job of ameliorating standing wave issues that you may find you don't need to employ room correction on your preamp or receiver, depending on the material makeup of your room. It's also, of course, handy for 2.1 systems, many of which lack room correction or PEQ altogether.

Electronics in this system were a little varied, although my Roku Ultra and Oppo UDP-205 were common sources. For preamps, I did quite a bit of swapping out between my Marantz AV8805 and Emotiva XMC-1 preamps, with Emotiva's new RMC-1 thrown in the mix for a bit, mostly toward the end of my evaluation.

One thing that does bear mentioning regarding setup of the Gravis VI: while assembly and app-based tuning and tweaking of its various features are all quite straightforward and intuitive, placement of the sub within the room may require a bit more experimentation than you're accustomed to. Sonus faber seems, as indicated by the manual for the Gravis VI, to favor side-wall positioning, which frankly has never worked as well for me in this room with other subs. When I relented, rearranged some decorations, and opted for placement more in line with what Sonus faber suggests, though, I found a sound that I couldn't quite eke out of the sub by fiddling with placement more in line with the norm for this room: utter control and authority, matched by impeccable musicality and satisfying output.

Once I arrived at the optimal, though unusual, position for the sub, after a good bit of moving and no small amount of salty language, I sat down for some serious listening. Given the emphasis that Sonus faber places on musical reproduction across its entire lineup, this is where I turned my attention first. I'll admit, though, that I didn't begin with any carefully considered bass stress tests. For quite a few listening sessions, I simply sat down with a glass of Warre's Late Bottled Vintage Port and just sort of let the music follow wherever my mood took me.

For more additional info click the link below
https://hometheaterreview.com/sonus-faber-gravis-vi-subwoofer-reviewed/