KEF R3 Review: Exemplary speakers that do almost everything right 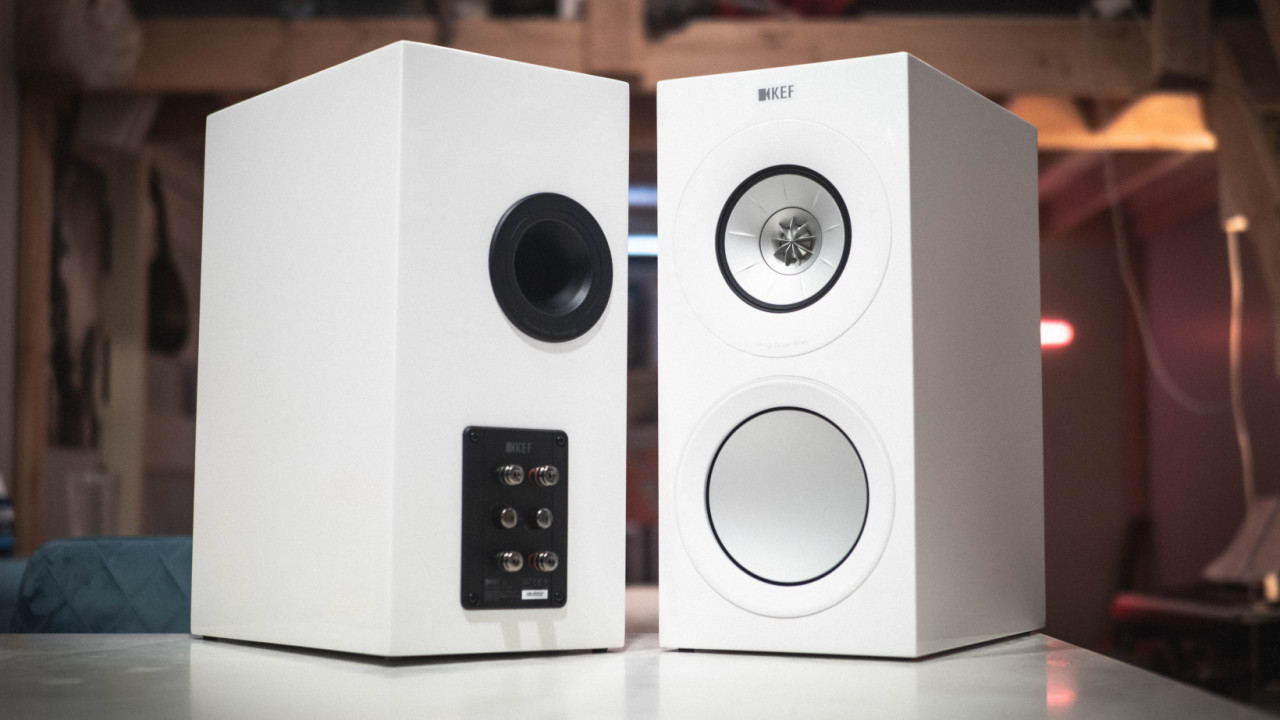 In the world of enthusiast speakers, few names stand out as much as KEF. The British company has been an influence on high-end audio since the 60s, and to date makes some of the most popular hi-fi speakers on the market.

Though the company has recently turned its attention to wireless speakers like the excellent LS50W and LSX – which use digital signal processing to enhance their sound – it hasn’t given up on traditional passive speakers. Hence today’s subject: the KEF R3. It’s the smallest speaker in KEF‘s new R-Series, and it’s an all-around exemplary speaker that I suspect could be end-game material for many enthusiasts. At $1,999, the R3 is not exactly cheap, but it’s a worthwhile investment for music lovers willing to save up.

Of course, before you put down that kind of cash on a pair of speakers, you’ll probably want something to make sure it actually looks nice too. No matter how good your speakers sound, you’ll spend more time looking than listening to them. Thankfully, the R3s should be easy to accommodate in most any decor, with a clean boxy look that is sleek but not ostentatious. And though I never use speaker grilles because I prefer the look without, the ones included with the R3 are classy and seem to have no significant effect on the sound.

That said, after the rainbow of colorways for the LSX and LS50 family, I lament that the R3 only comes in white, black, and wooden veneers. You’ll also want to keep in mind the R3s are massive. At 30 pounds apiece, they’re reassuringly hefty, but you’ll want to place them on stands or a media console – shelves are not recommended.

Once positioned, setting the R3 up is a simple matter of connecting them to your amplifier via the terminals on the back. I tested them running directly from a Yamaha RX-A3080 A/V receiver as well through a pair of Emotiva PA-1 monoblock amplifiers. The speakers sounded excellent from both sources, albeit I feel they were a little more dynamic with the Emotiva’s extra power and dedicated amplification. KEF recommends an amplifier capable of 15 to 180 Watts into 8 Ohms, but I’d advise aiming for the higher end of that scale, (having too little power is worse than too much).

Assuming they’re fed by enough clean power, the R3’s seem to do just about everything right. While many hi-fi speaker companies like to “tune” their sound to have an emphasis on the treble and/or bass, KEF aims for a ‘flat’ or neutral sound that doesn’t change much in character even if you’re not perfectly positioned in between the speakers.

Don’t confuse flat with boring though. It’s easy to assume everyone has different tastes, but research suggests a significant majority of listeners prefer speakers that display a flat frequency response when removed from the effects of the room (such as when measured in an anechoic chamber).

In a typical room with rampant reflections, a flat speaker‘s frequency response will actually be tilted such that the bass is higher than the treble. However, as our hearing adapts to our surroundings, the speaker will still be perceived as neutral. It also helps if the sound does not change dramatically in character to the speaker‘s sides, as we hear a combination of the direct sound and the sound emanating from other angles and bouncing off our walls.

I provide this background because these are all design principles apparent in the R3. It’s a speaker of highly neutral character, with which little feels particularly emphasized or omitted. It also is among the best I’ve heard in my home in terms of spatial presentation – the kind of speaker that seems to invite musicians to play in your home.

The midrange and treble on the R3’s are pristine. Cellos and pianos have proper timbre. Vocals sound natural, without little apparent coloration or emphasis. They are perhaps a little laid back in their presentation, pushing voices back in the mix ever so slightly, so the R3 may not be the best choice for those who like upfront vocals, but it’s an overall balanced sound that’s hard to fault.

The treble is smooth – veering only to sharpness or dullness if present in the recording. In this regard, it also sounds more refined than KEF‘s own LS50 or LS50W. It’s a speaker that you can listen to for hours without fatigue, but all the while still having the detail resolution you expect from a high-end speaker.

You can observe many of these qualities in basic measurements. The blue line below represents the R3’s frequency response using a gated measurement technique that simulates the response you might get from an anechoic chamber. It’s not effective in the lowest part of the frequency response, so that area has been truncated, but you can still see a relatively linear response throughout the frequency range, a pair of small dips in the midrange. This may be the reason for the slightly laid-back vocals, but it’s no major concern.

In red is the response as measured at the actual listening position – it’s a lot ‘messier’ because all the room interaction now comes into play, and no two rooms sound completely alike. Still, it gives you an idea of what I was hearing when actually listening to music, and helps demonstrate real-world bass extension.

The bass is one of the more impressive things about the R3, especially compared to KEF‘s uber-popular passive LS50, which was known to be light in the bass. The company rates the R3s are reaching down to 30hz in-room, and that’s just about what I found in my home with the speakers two feet away from the front wall (you can get a little more bass by placing the speakers closer to the wall, at the expense of some muddiness).  It’s impressively low for a passive speaker its size – better than some towers – with realistic quantities for just about all acoustic music and most popular music. You aren’t going to find much better than the R3 in a passive design.

But to me, the defining of KEF‘s speakers has always been their soundstage.

Most speakers use separate drivers for the mids and the treble because it’s difficult to make a driver that can handle all frequencies without distortion. Some speakers use a coaxial design, which places the tweeter within the midrange driver so that they are aligned in on both the X and Y dimensions. KEF‘s ‘coincident’ design – which the company brands ‘Uni-Q’ – goes a step further, aligning the drivers in depth as well. This means that both high and midrange frequencies emanate from the same point in space.

(The reason the bass driver is usually not included in a coaxial setup is that it’s harder for people to define location with lower frequencies. That’s why subwoofers are so flexible about placement.)

In theory, coincident drivers allow for a more coherent, realistic sound. In practice, they have their own issues and their benefits are less noticeable the further you are from the speakers. Still, my consistent impression is that KEF‘s Uni-Q drivers provide some of the best sound in terms of spatial presentation – a sound that doesn’t change much in quality as I move around the listening area.

The measurements hint at this too. In the above graph, I’ve placed the speaker on a turntable and measured frequency response at 15-degree intervals. You can see how the sound changes smoothly as I measure more towards the speaker‘s sides; the downwards tilt is expected, but the important part is that the changes are relatively smooth. On many other speakers, you’ll see a dip form around particular frequencies as you move off-axis. Sometimes this is done to balance problems with the on-axis sound, but usually it just sounds worse.

The vertical response, measured at 0, 5, 10, 15, and 30 degrees above and below the tweeter, shows similar results.  This suggests the speaker will sound good whether you are sitting down or standing up:

This controlled dispersion helps give the speakers a wide listening ‘sweet spot’ that is not finicky about where you plant your butt. Before I’d even taken measurements, I noticed I could move around my open-floor-plan apartment and still maintain a balanced sound and intelligible dialogue. In fact, the horizontal measurements suggest the speakers are actually slightly smoother around 15 to 30 degrees off-axis. Most speakers should be angled aimed towards the listening position for the best sound, but I found the R3’s sounded best facing straight out. Your mileage may vary.

This isn’t to say everything about the R3 is great. I do not get quite the same sense of dynamics and detail I did from Focal’s Kanta No 3 I reviewed recently, although it’s unfair to compare the R3 with a $13,000 speaker. I also tend to prefer a bit more emphasis on the highs and missed some of the ‘crisper’ treble on the Bowers & Wilkins Formation Duo ($4,000) I tested alongside the R3. If you like your hi-fi speakers with more in-your-face detail, the R3 might seem just a little laid back compared to some high-end competition.

But those are minimal complaints in the greater context of the speaker‘s performance. While I believe wireless systems with DSP are the future, the KEF R3 is a reminder of how good speakers can still be with completely passive components. The R3 is pretty, sounds great no matter where you’re listening from, and is not finicky about placement. If you’re looking for new speakers and have $2,000 to blow, the R3 merit serious consideration.