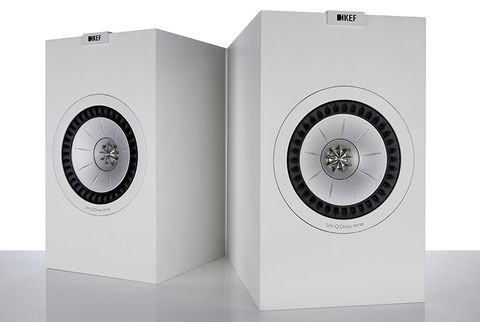 The KEF Q350s offer a sophisticated, insightful presentation that's beyond their modest price

If there’s one overriding theme across the new KEF Q350s, it’s: refinement.

Nearly every aspect of the speakers has been redesigned to achieve a cleaner, more sophisticated presentation - both sonic and physical.

The original KEF Q300s, which we tested back in 2011, went from a five-star First Test to winning a What Hi-Fi? Award.

But newer, better speakers came along and demoted those £450 speakers down to four stars. A new generation of the Q series was due.

And so we have the new KEF Q350s. These £530 standmounters offer stunning sound and elegant looks, at a competitive price that will see them challenging at the top of their class.

The first thing you’ll notice is how clean and modern the design is compared with the old Q300s. Gone is the strip of chrome across the front baffle, as well as any holes for attaching the grilles (which now snap on magnetically).

They look sleek and minimal. Apart from the logo at the top, the fascia is completely devoid of anything to distract you from the main event: the latest generation of KEF’s iconic Uni-Q driver.

What looks like a single driver is actually a 25mm vented aluminium dome tweeter sitting in the throat of a 16.5cm aluminium mid/bass driver.

This single point-source arrangement is designed to improve integration between the drivers and the way sound is dispersed. The distinctive tangerine waveguide on the tweeter helps distribute sound evenly.

The latest evolution of the Uni-Q driver features a damped tweeter loading tube – derived from KEF’s high end Reference series – to soak up unwanted activity from the back of the dome.

It’s designed to improve the quality of the high frequencies. Other tweaks have been made to the motor system and shape of the mid/bass cone to help reduce distortion.

The Uni-Q driver now sits right in the middle of the cabinet. This isn’t just to keep a consistent look with the rest of KEF’s speaker range, such as the LS50s - its position also helps reduce internal standing waves and improve clarity.

The port has been moved to back of the speaker. KEF claims this ensures any midrange leakage of noise is less audible. The port has also been redesigned to reduce noise and distortion for deeper, cleaner bass performance.

You’ll find single-wired speaker terminals at the back, rather than the biwired arrangement of its predecessor. And the wall brackets from the old Q300s have been removed for a much neater look.

The cabinets themselves are of impeccable, sturdy build. They come in two satin finishes: black or white, with black or silver Uni-Q drivers to match.

KEF’s redesigns pay off, as the Q350s display a level of clarity and subtlety that’s unheard of at this price.

Play Coward from the Interstellar soundtrack, and we’re stunned by the layers of detail exposed in the Hans Zimmer track. The KEFs digs deep and unearths nuances with a great deal of composure and precision.

The ambient noises are fleshed out with plenty of detail, and the way various noises interact with each other makes musical sense thanks to the KEFs' well-timed presentation. The metronome ticking throughout the piece sounds pristine, with precise edges slicing off bits of time.

These speakers go surprisingly deep, too. The thumping beat simmering underneath the tune is packed with rumbling, menacing texture.

The KEF Q350s stay clear of sounding too clinical - they’re simply articulate in the way they deliver every single note. Voices sound clear and characterful, and the integration between midrange and treble is seamless.

It’s hard to pinpoint where one begins and the other ends – a testament to just how well the Uni-Q driver is tuned. It serves to make rival Dynaudio Emit M20s sound a touch rough around the edges.

The scale of sound is huge, too. The extra cabinet volume gives the KEFs the ability to fill a room even more easily than the Dynaudios. You can accurately pinpoint instruments on the Q350s’ airy and open soundstage.

The speakers are revealing as well, exposing the difference in atmosphere and space seamlessly during the shift from studio to live recording in Right Where It Belongs by Nine Inch Nails.

They also sound wonderfully even across the frequencies. Where we criticised the old Q300s for having a rather thin treble, the Q350s have no such problem. The treble performance is detailed and sweet, sound crisp without ever going bright enough to make you wince.

Even aggressing recordings like Marilyn Manson’s Antichrist Superstar – where abrasive sound and noisy, distorted guitars can easily exacerbate treble flaws in most speakers – sound controlled and cohesive even while letting the high frequencies soar.

We wish the KEFs had a more explicit sense of drama and drive, though. Where songs like the The Unthanks’ Gan To The Kye plays to the KEFs' strengths of delicacy and nuanced melody, other songs need a bit more rhythmic punch to complete the effect.

Amanda Palmer’s Runs In The Family relies on an energetic, attitude-laden beat that sounds more exciting through the Dynaudio M20s. The KEFs are a touch too refined to fully let go.

The drumbeats hit with a suggestion of restraint and the sound dissipates. The Dynaudios make the beat hit with an impactful thwack that’s more satisfying to hear. Even the metronomic ticking in Interstellar has more impetus through the M20s – it builds up a more palpable sense of tension.

The KEFs, to their credit, don’t let distortion creep in when pushed hard, nor do they lose composure when things get messy – they can keep instruments separate even as they come crashing towards you in a wall of glorious sound. But you have to crank up the volume to really experience the full talent of these Q350s. That even, refined sound doesn’t properly engage your attention at low volumes.

The Dynaudios may sound more immediate and fun, but they can’t compete with the KEF’s high level of insight and clarity.

In terms of system-matching, we’d make sure you really like your electronics. These KEFs are transparent enough to show off everything your electronics are capable of, warts and all.

We’d suggest the superb Rega Brio (£600) stereo amplifier as a good starting point. It complements the KEF’s sound, and brings a degree of natural warmth and drive.

We’d also spend some time making sure these KEF speakers are set up properly to get the best out of them. Give them some time to run in, position them on sturdy stands, and toe them in towards the listening position.

And while the rear port demands you give them some space, it’s worth putting them close to (but not up against) a wall to add a bit more solidity to the sound.

It boils down to different flavours of sound. While some people may prefer the Dynaudios' energy, and others the KEFs' mature presentation, there’s no doubt they’re both superb five-star speakers.

KEF can hold its head up high: the Q350s are a cut above the rest. This level of clarity and refined detail isn’t something we usually hear at this mid-range price – we’re really impressed.