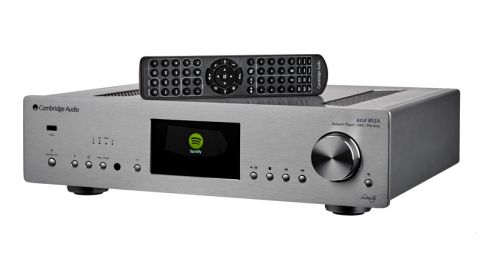 Another knockout Cambridge streamer, whose performance more than justifies the premium price tag

Say hello to the daddy of Cambridge Audio’s network streamers… and then, if you’re fortunate enough to have the spending money, think seriously about welcoming it into your hi-fi system with open arms.

The Azur 851N, part of the company’s flagship Azur 851 Series, is a ‘step up’ from the mid-ranging CXN (our 2015 music streamer Product of the Year), and as you’d hope for the price a pretty giant step at that.

Just like the CXN, it doubles as a preamplifier and can plug straight into a power amp thanks to a volume output controlled by a 32bit Blackfin digital signal processor. Music signals pass through two 24-bit Analog Devices DACs in dual differential mode, meaning each stereo channel processes information separately for, Cambridge says, greater accuracy.

Connections are greater in number too – it adds second coaxial and optical and third USB inputs, as well as a AES/EBU input – and in terms of build it’s more Hulk than Popeye to look at.

But it’s the leap in performance over the CXN that really gives it grounds for the heavier price tag around its neck.

The CXN’s muscular, full-bodied presentation, lathered in enthusiastic drive, bone-rattling punch and class-leading insight, is present in the Azur 851N, yet everything is served with extra helpings of expression and dynamic skill, not to mention extra space and openness.

The thrashing electrics in the opening of Band of Horses’ Cigarettes, Wedding Bands that feel a little mashed together through the CXN, are more coherent through the Azur. And even with a low-res Spotify stream of Cold War Kids’ Lost That Easy, there’s a sense of isolation to the vocals and depth to the recording that isn’t palpable through the CXN.

It just about one-ups its little brother in every which way, as flagships should do, leaving you with a remarkably entertaining and versatile performer. Rhythmic cadence and precision comes to the fore; the track’s polyrhythmic structure isn’t lost on the shrewd Cambridge as it keeps tabs on the hypnotic bass beat and jagged and melodic synth rhythms, juggling the two without compromising their close collaboration.

It’s punctual, decisive and quick on its feet with the fluctuating tempo too.

With balance on point, there’s punch and depth down low and sparkling bite up top, with all-you-can-eat solidity fleshing out what’s a clear and articulate midrange.

In Sufjan Stevens’ Jacksonville, cascading violins, treading keyboards and lucid banjo strumming are all wonderfully textured around his exalted, tender vocals. Trumpets soar freely through the mix, and the delicate bells never have to fight for attention.

Striking a balance between power and delicacy, the Cambridge ensures there’s never a dull moment in John Williams’ Cadillac of the Skies. It drives home cymbal crashes while choral vocals fill the room with power, scale and openness, and the pensive instruments that work away underneath don’t suffer for it.

It draws out the finer flurries of detail, and as building strings creep ever nearer to their subtle climaxes, the Cambridge proves just as capable of communicating the sweeping dynamic swings as the subtler strokes.

While the Azur really shows what it can do with a 24-bit/192kHz of Hans Zimmer’s Born In Darkness – giving it a wonderfully insightful, open and layered presentation – it doesn’t sound too compressed when fed an MP3 either; the sound closes in notably, yet there’s still plenty of space and detail to enjoy.

The 851N’s design looks ‘expensive’ and we don’t doubt its solid full-metal casework or polished (silver or dark grey) finish would stand the test of time. It towers over the CXN, being taller and chunkier – and is just as elegant.

The crisp 11cm display looks almost identical to that of the CXN, and the colourful album artwork that fills it piles on the class. The on-unit buttons move away from the side of the screen and instead run across the front and although it makes the Azur’s panel look busier, we like it all the same.

The large volume dial turns with ease and is helpful for manually scrolling large music libraries.

While the intuitive remote is on hand too, the free Cambridge Connect app (iOS and Android) is the best way to access and browse your music. It works well, opening doors to thousands of radio stations and promptly picking up the servers on our network (just make sure both your device and streamer are on the same network).

The interface is easy to navigate, and libraries can be browsed in your choice of listed or grid format, although it’s more functional than fancy.

If you have more than one Cambridge streamer in the household, it’s easy flicking between them in the app too.

Whether you connect the Azur over wi-fi by plugging in the supplied USB adapter, or via Ethernet cable, networked music files up to 24-bit/192kHz can be streamed (and upsampled to 24-bit/384kHz) from your PC, laptop or NAS drive.

And where file compatibility is concerned, it can handle everything from DSD64 to FLAC and WAV.

Spotify Connect and AirPlay are there, as is Bluetooth if you purchase an optional dongle at £70. However, it goes without saying we’d prefer it built-in or, especially at this price, at least included in the box.

Building on the CXN’s impressive connectivity list, the Azur 851N is well furnished around the back. Analogue outputs are taken care of by a pair of RCAs and balanced XLRs, and there are digital optical and coaxial outputs too.

Twin optical and coaxial inputs join a single asynchronous USB input for your laptop, and there are three standard USB sockets (one on the front, two at the rear) for connecting external hard drives and memory sticks.

Like the CXN, all the digital inputs are capable of playing hi-res files up to 24-bit/192kHz.

There are also system connections for universal control of a multi-component Cambridge system too.

It’s an exhaustive list, although if we’re being picky we’d like to see a pair of analogue inputs onboard for hooking up older kit.

Cambridge has done it again. The Azur 851N, a natural sonic upgrade to the CXN, says all the right things, and is the ideal high-end streamer if you’re looking for a capable digital pre-amp or are after something to simply slot into your existing system.

We’d like wi-fi and Bluetooth connectivity to be more streamlined, but having dongles sticking out of the box is a small price to pay for its accomplished, all-round performance.