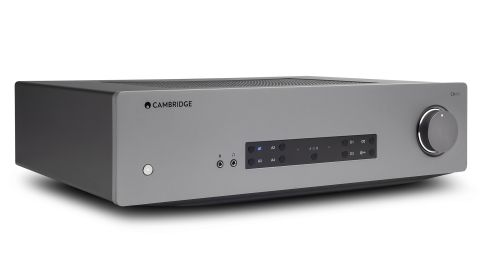 Apart from the substantial price rise, there’s little to complain about here - the CXA61 is an real winner

The new amplifier looks remarkably familiar, and apart from the absence of the original’s balance and tone controls on the front panel, there’s little to separate them. While we mourn the loss of these (occasionally) useful features, we’re pleased to note that the CXA61 remains a solid and classy piece of kit. It looks and feels a step above its rivals, though once again that price rise takes the shine off a little.

Look closer at the specification and you’ll notice that Cambridge’s engineers haven’t just been twiddling their collective thumbs for the past four years. There are plenty of detail changes between the two generations of CXA amplifiers. The big news is that there’s now a USB (type B) alongside the usual coaxial and optical digital inputs on the rear panel.

Cambridge’s engineers have specified a new DAC chip on the CXA61. It’s now an ESS Sabre SE9010K2M DAC rather than the Wolfson 8740 of the previous model. This means it is now compatible with 32-bit/384kHz PCM files and up to DSD 256 data streams. That’s pretty comprehensive and likely to cover just about any file most people will use.

Bluetooth is built-in too, and it’s of the better aptX HD (24-bit/48kHz) variety. The old amp needed an optional Bluetooth dongle that added £70 to the price. Cambridge has also courted the home install market with the addition of a RS232 port and trigger inputs that help to integrate the CXA61 into an automated system.

Looking at the specifications, it would be easy to assume that little had changed on the analogue side. The power output remains a solid 60W per channel and there’s no change as far as connectivity is concerned. This integrated still has four line-level stereo RCA inputs on the back and a 3.5mm jack for portable music players on the front.

That should be enough for most systems, though we’re seeing more focus on phono inputs over the last couple of years, so it’s a bit of a surprise that Cambridge has decided to omit that from this amp. Of course, we’re sure the company would point towards its fine, affordable Alva outboard phono stages and suggest that’s the route to take if vinyl replay is a priority. We wouldn’t necessarily disagree, but it’s still neater to have it all in one box.

While the basic analogue circuit hasn’t been revamped, the engineers have improved sound quality by changing most of the op-amps in the signal path and upgrading the capacitors in both the pre and power sections of the amp.

We’re pleased to report that all of this work has paid off. While that hefty price suggests that the CXA61 might struggle against more affordable rivals, it doesn’t take long to realise Cambridge’s detail tweaks have worked really well. While still recognisably related to the older amp, this new one sounds more transparent and playful. It’s simply more fun to listen to, regardless of input chosen.

Through the line level connections (where we use our reference Naim ND555/555PS music streamer as well as the more price compatible  Marantz CD6006 CD player) we’re pleased by the amplifier’s lively nature. We play a range of music from Hans Zimmer’s Gladiator OST and Living Room Songs from Olafur Arnalds, right the way through to Prince’s 3121 and the CXA61 handles it all with skill.

This integrated sounds firmly in control, regardless of whether we use B&W’s 606s or our reference ATC SCM50 speakers. It has enough in the way of scale and authority to work well with the Gladiator OST. There’s plenty of punch when required, with the amplifier thumping out the album’s numerous dynamic peaks with conviction. We’re pleased with the composure on show and the CXA61’s refusal to sound confused or stressed when the music gets demanding.

It has a nicely judged tonal balance that walks that delicate path between attack and refinement. This is the kind of presentation that works well across a wide range of speakers and musical genres. There’s spaciousness here too, and the kind of outright clarity that sets a high bar for the price.

Stereo imaging is impressive, with the amp able to place sounds and instruments with precision and stability. It’s an expansive soundfield and one that's nicely layered, provided the rest of your system is suitably talented.

Once we spend a decent amount of time listening, it becomes clear that few rivals have the resolution to challenge the CXA61. It digs up low level details with ease and renders them with care and conviction.

This is made clear when we listen to the Olafur Arnalds set, which relies on the system having a high degree of subtlety. It’s easy for an amplifier to sound ham-fisted when playing this recording, but it’s a trap that the Cambridge avoids. Instead it is confident and composed, but never overplays its hand.

This Cambridge is a rhythmic performer too, delivering Prince’s 3121 with verve. There’s plenty of entertainment to be had here from thumping basslines to intricately shifting rhythms with Prince’s distinctive vocals at the centre. The CXA61 ticks all the hi-fi boxes without forgetting that all the detail and tonal neutrality in the world doesn’t matter if the emotional content of the music is ignored.

We don’t like the fact that the CXA61 has gone up in price so much over its predecessor. However, it is better equipped and clearly sounds superior to the last model.

Just as importantly, it justifies the price premium over rivals such as the Audiolab 6000A and Rega Brio by delivering a combination of sonic ability, features and build quality even those fine amps struggle to match. If you’re looking for a well equipped integrated at this level, this is a great place to start.