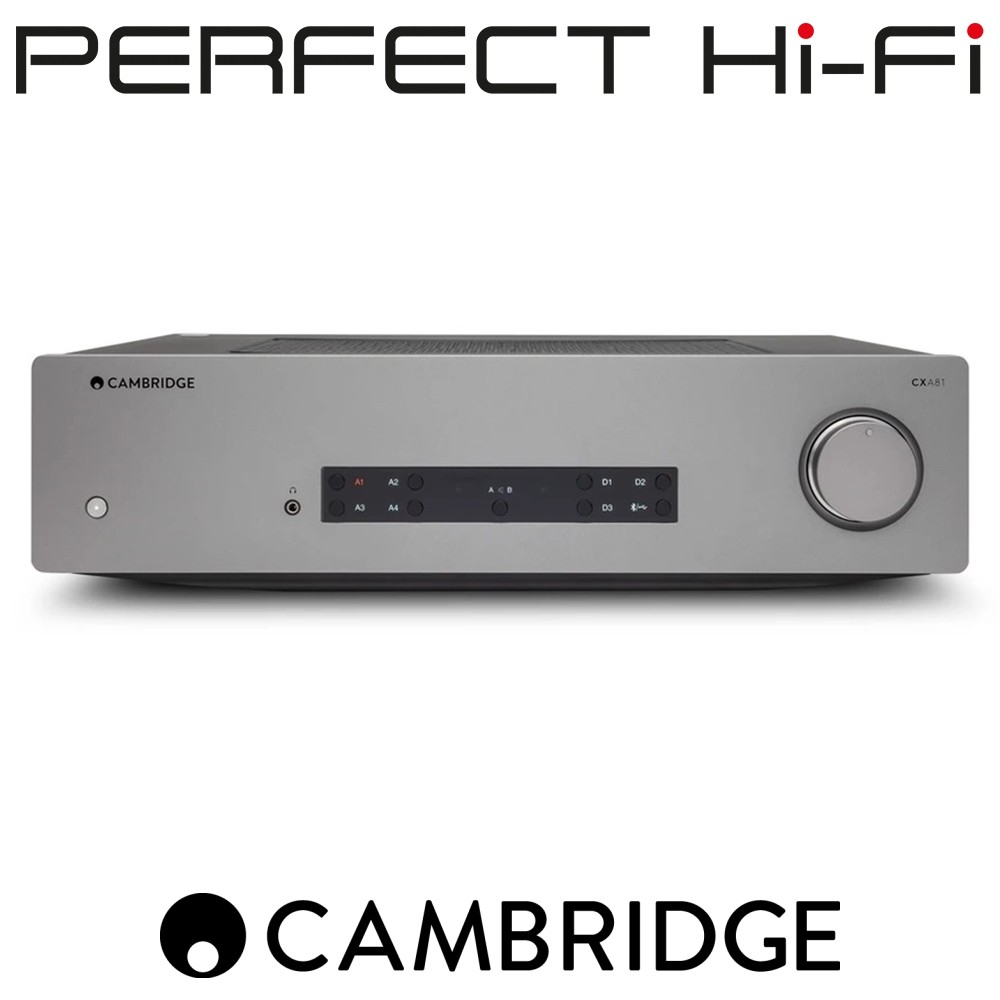 CX SERIES 2. THE SOUND OF PROGRESS.

Half a decade after the CX range redefined performance at its price point, it’s time to reimagine, reengineer and reinvigorate. The all-new CXA61 and CXA81 integrated amplifiers build on the foundations laid (and the Awards won) by CXA60 and CXA80, but with a fresh and progressive perspective.

The CXA81 is poised, effortless and sophisticated. Its 80 watts per channel give it complete authority over music, and it wrings every emotional and musical nuance from your whole collection.

How do you take an admired and successful integrated amplifier, one that’s won respect and plaudits around the world, and make it even better? Well, if you’re a Cambridge Audio engineer, you examine every aspect of the performance - and then you do everything you can to make it ‘more’. More refined, more precise, more engrossing… more musical. The CXA81: it’s everything you loved about the CXA80, but more so.

All the research, all the development, all the time and effort that’s been expended on the CXA81 has been for one reason alone: to make this the most accomplished and absorbing integrated amplifier ever offered at the price. Every component selected, and every engineering decision taken, is based entirely on the desire to progress. The CXA81 has been designed and specified without compromise, in order to deliver the complete musical picture.

The CXA81 is designed to bring your music to life, no matter how it’s stored. So it features an entirely new digital board, including the cutting-edge ESS Sabre ES9016 digital-to-analogue convertor. Which means digital audio files up to a heady 32bit/384kHz, or DSD256, are brought dramatically to life, with every detail and nuance delivered intact and in full. The CXA81 combines unparalleled accuracy with vivid musicality, without sacrificing convenience.

Thanks to numerous improvements and upgrades - and thanks to an overspecified toroidal transformer - the CXA81 delivers a prodigious 80 watts of power per channel. This means the CXA81 has complete authority over even the most demanding speakers, it means big dynamic shifts in music are handled with total control, and it means the whole musical picture is available no matter if you’re playing at discreet background levels or at party-time volumes.

The CXA81 covers all connectivity bases, giving you complete freedom of choice. As well as digital optical and digital coaxial inputs, it features unbalanced stereo RCA inputs alongside balanced XLR sockets - and wireless connectivity via Bluetooth’s cutting-edge aptX HD standard is on board too. So there’s no need to compromise on performance in the name of convenience.

At the heart of the CXA81 beats a completely reimagined and redesigned power amplifier stage with optimised capacitor values. The resulting sound is pristine but not clinical, with unrivalled musical coherence no matter the source.

Thanks to relentless dedication to progressive engineering, The CXA81 is a complete solution. Its combination of versatility, power and audio excellence means it can form the centre of your musical experience for years to come.

The CXA81 is part of a second series of CX components that was originally launched by Cambridge Audio in 2014. As well as this integrated amplifier, the line-up also includes a second amp, CD transport and a network audio streamer. According to Cambridge Audio, the second generation CX Series has been re-engineered to bring “full-fat” hi-fi into the home at an “affordable” price (the CXA81 is most expensive product in the range).

Rebuilt from the ground up, the CXA81 offers several new features over its predecessor, the CXA80. These include the Sabre ES9016K2M digital-to-analogue converter ESS Technology, an improved USB input supporting 32-bit/384kHz PCM and DSD256 quality, and an integrated aptX HD Bluetooth receiver to enabling streaming from mobile devices at up to 48kHz/24-bit. The back panel features sockets for three digital inputs (two optical, one coaxial), four analogue inputs, two balanced (XLR) analogue inputs, a USB input, as well as outputs to connect a subwoofer and preamp. There are also bus ports for custom installation integration and other connected CX Series hardware, and a threaded post to attach the supplied Bluetooth antenna.

Performance
Unlike bulky powerhouses from the US or the switch-laden boxes favoured in Japan, British amplifiers are often typified by slimline chassis and basic controls. Indeed, it was Cambridge Audio that pioneered this minimalist approach to amp design in the 1960s (see below), thereby influencing the generation of British hi-fi makers who followed in the subsequent decades. That same design ethos continues with Cambridge Audio today , and the CXA81 therefore maintains the family tradition.

Now I for one certainly appreciate a design that reduces the button count and favours sonic fireworks over bells and whistles. And while the CXA81 has a clean and simple fascia, its overall looks are a tad dreary to my eyes. It lacks a certain classical elegance or the sort of timeless appeal that gives years of visual pleasure as the centrepiece of a hi-fi system.Of course, aesthetics are a matter of personal taste, and what the CXA81 may lack in the eye candy department pales into insignificance when in it comes to aural satisfaction.

At this point I should give a word of warning: this amp is best served warm by which I mean it really only started giving of is best after I had run it in and had kept it going for a few hours. Straight out of the box, it can lack the delicacy and control expected at this price point, delivering a somewhat brutish performance with a wallowing bottom end that initially raises an eyebrow or two. But once it’s oven-ready, the CXA81 comes alive. And here, the first thing that struck me was how very competent it is at imaging and soundstaging.

The re-mastered CD of Kraftwerk’s 1974 classic Autobahn begins with what band co-founder Ralf Hütter* claimed was his own VW starting up, and right from the get-go, you can place and position every sound with superb clarity, from the car door thumping shut to the engine turning over and revving before it is driven from left to right. The CXA81 has you instantly hooked and you know you’re in for a great ride. (*RIP Kraftwerk co-founder Florian Schneider, 1947-2020.)

Switching to USB and 192-bit audio files played from an Apple Mac, and the Cambridge Audio certainly knows a thing or two when it comes to balance and control. 'Lose Your Smile', from the 2018 album 7 by dream pop duo Beach House, can come across as a bit of a mess on many systems. But with the CXA81 installed in the engine room, the track’s atmospheric rhythms, swirling synths and psych inspired vocals are all pumped out with delicacy as well as power without sounding stodgy or bloated.

And things don’t begin to unravel when you stream from a mobile via the Bluetooth connection. Recently, I have listened to some other integrated amps that feature Bluetooth connectivity and at the same price level as this Cambridge Audio and their performance fell into disarray when used for streaming. I won’t name names, but one such amp from a reputable marque just wasn’t able to lock onto a Bluetooth signal and suffered from constant drop outs. No such issues with the CXA81. Its Bluetooth performance is rock solid, reliable and oh-so sweet, especially when streaming rock and pop from my Huawei P10 mobile phone. The hypnotic guitars from Intro by The xx are delivered with great gusto, while the jaunty French Navy from Camera Obscura is sure to get you swaying, going straight from your heart to your hips.

Where the amp is less successful is with classical music. For example, Helen Jane Long’s piano on ‘Survivor’, from her 2016 CD Identity, initially sounds engaging enough as it plods into life. But as the piece progresses and her piano is joined by cellos, the keyboards seem to become lost in the background or are otherwise delivered with the same weight as the other instruments, resulting in a performance that lacks colour and contrast. I had a similar experience with the 1995 Naxos recording of Bach’s The Well-Tempered Clavierwith Jenő Jandó’s piano not bursting out onto the stage with the vibrancy and immediacy it deserves. Of course, these perceived differences between the CXA81’s  performance with rock or pop and the way it delivers classical music are subtle rather than stark. In the final analysis, rock and pop fans looking for sonic thrills won’t be disappointed.

Cambridge Audio the back story
Cambridge Audio is a British hi-fi specialist whose roots go back more than half a century. The firm designed its first product in 1968, making its debut with the revolutionary P40. This 20W stereo amp had a slimline chassis and was the first to use a toroidal transformer. Unlike previous transformers that were wound onto rectangular cores, toroidal inductors and transformers feature a donut-shaped magnetic core around which wire is wound. Unlike their rectangular predecessors, where the magnetic field (or flux) was more likely to leak from the core at the sharp bends, the shape of toroidal transformers results in lower leakage flux from the core, less electromagnetic interference and greater efficiency.

The P40 was followed by the P50 which was designed to be easier to mass produce. But for continued success, Cambridge needed more investment and in 1971 it was acquired by CE Hammond & Co Ltd which was a distributor of various audio products in the UK and North America, most notably Revox tape recorders. This was when Cambridge Audio was formed as a company, with electrical engineer Stan Curtis appointed as its technical director. Curtis went onto to achieve great success and has become a celebrated and successful figure in the hi-fi industry. As well as spearheading the rise of Cambridge Audio and later Mission, he has also been at the helm of leading British marques such as Wharfedale and Quad, and was involved with the creation of IAG which now owns these brands.

But back to the early 1970s and the nascent Cambridge Audio, Curtis assembled a new team of engineers who came up with a string of successes, including the P60 integrated amp in 1974, the Classic One and Classic Two amps that featured bespoke circuit designs in 1975, and an updated version of the P60 dubbed the P80. In 1980, Cambridge Audio was acquired by hi-fi entrepreneur Vince Adams and was re-launched as Cambridge Audio Research. But over the next 14 years, ownership of the company changed hands on four different occasions: in 1984 it was taken over by Stan and Angie Curtis who renamed it Cambridge Audio International; in 1988 the firm became part of the Hi-Fi Markets Group; and in 1990 it became part of Wharfedale, the famous Yorkshire-based loudspeaker maker which was now led by Curtis.

By then, Cambridge Audio had begun to show its digital expertise with the launch of the world’s first two-box CD player in the shape of the CD1, as well as the DAC2 and DAC3 digital-to-analogue converters. But as Wharfedale continued to re-organise itself, it was decided that Cambridge Audio needed a new home where it could get the attention it deserved in order to flourish. In 1994, the company was sold to the Audio Partnership which had been created by Richer Sounds’ owner Julian Richer and his business partner James Johnson-Flint. The idea behind the Audio Partnership was to acquire under-developed audio brands, especially British names known for their engineering excellence. As well as building its own in-house engineering team, the Audio Partnership also signed exclusive freelance contracts with notable engineers such as Mike Creek and John Westlake at Pink Triangle.